F that first four miles, F that bike, F that creek, the riding friends are okay, and F this ride.

How the hell did I get there:

I rode 2019 Crusher 225. The crusher was really hard. Dealing with Covid is harder. The 906 adventure team really stepped up with changing the format to allow participants to ride the course anytime between July 1st and October 1st with trackers and checkpoints. Now, I just needed some peeps to ride with. Some friends chatted about this, and we completed some serious training rides in preparation, but no one committed until 6/28. I received a text from Doug Metzger that he's signing up and we agreed to ride on 7/7. Doug had some questionable commitment: 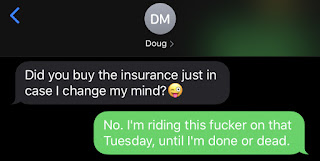 A few texts later, Chris Marquardt and Rod Palmer were in for this ride as well. Everyone completed the normal prep work to get their bikes ready for this adventure, and I made a cheat sheet to keep the checkpoint selfies on my mind: 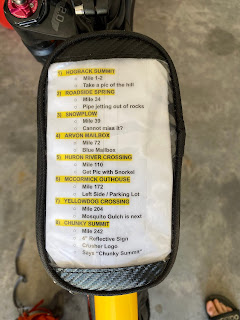 Slightly before 6:00am on 7/7/2020, the four of us were dropped off at the Forestville trailhead. I seen another crusher beginning their journey in the parking lot, but didn't get a chance to chat as we were still getting our group arranged. Pre-ride pic: 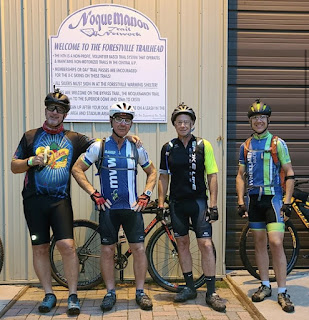 At exactly 6:00am, we pedaled out onto Forestville Road to begin this journey, and promptly blew the first turn on the course at mile 1 missing the single track and having to turn around. This is going to be a long day.

The Crusher facebook page heavily warned that Hogback Mountain was a hike-a-bike. Todd warned our group, that if you don't like completing hogback mountain, then you might as well quit, because the ride isn't getting any easier. Here we are: 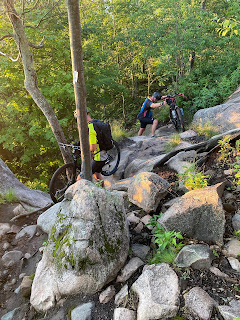 Climbing up Hogback with frame bags that filled the triangle of the bike was quite the chore, but the bikes got up there and the morning view was breathtaking: 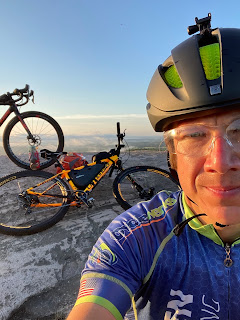 Our group hit the first dirt/gravel road, and Doug calls out to me, "How's our pace?" I tab through the GPS. We've covered 4.9 miles in 94 minutes total time. I reply, "The pace doesn't work out to finishing in 36 hours."

After this, the miles really started rolling. Oh wait, now our group is riding on railroad tracks that were left in the woods and someone machete'd a 8 inch path for half a mile 😒. This is going to be a long day.

Eventually, the route curators showed some mercy and gave us some gravel/sand roads and we finally were rolling toward the roadside spring. There was even some pavement. Through this paved section, we came across the crusher at the start. Her name was Lois Smith. She was rolling a bearclaw on thunderburts 👌 and the chamios was cut out of her bibs 😱. She was unable to convince any of us on going this route with the bibs. We rolled together for a bit the next several miles. The pavement was short lived and turned into gravel/sand. Around mile 20, Rod took a spill on one of the wooden bridges. I didn't exactly see what happened, but the bridge took the hit from Rod like a champ.

The pipe is exactly as described. Doug's letting me know I'm number one: 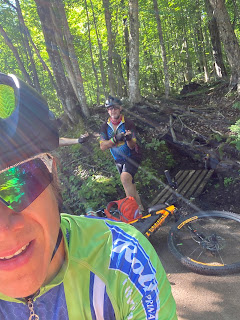 You would think taking a friggen selfie with a snowplow would be uneventful, but nooooooooo. Mile 38 there's an orange snowplow. Someone called out, that's not it. Then my brain engages, I'm getting a selfie anyways.

So we stop, take our pics and roll: 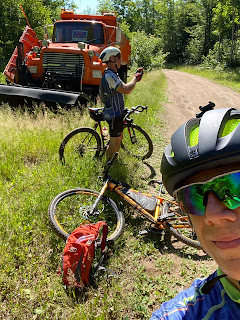 We did discuss that the plow was the wrong color and too nice compared to the facebook post we could remember. Also, having a checkpoint that's for sale seems pretty brutal, but this is the crusher. For all we know, that is Todd's number on the for sale sign or they are giving crushers the opportunity of purchasing an entire checkpoint. Either way, were not riding till mile 44 only to turn around.

Our team eventually found the correct checkpoint. At this point, we're 43 miles into the ride, and our total time is 376 minutes. Mathematically, we might finish exactly at 36 hours. This is going to be a long day. 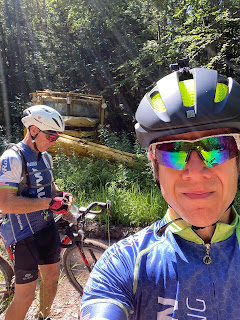 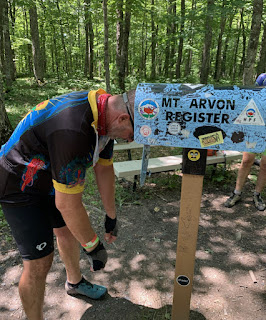 Getting to the Huron River crossing was a time killer. There was sand, water stops, heat, sand, more heat, more sand, then finally a pushing a bike through sand that seemed to go forever. Crossing the river: 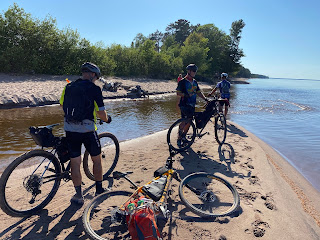 After crossing the river, a couple riders changed their socks, we ate, attempting to clean up what we could, then continued on pushing our bikes through sand. We finally started pedaling our bikes out of that area after 7:15pm. At this point, our total mileage was 110 miles and we were past 13 hours into the ride. The morale was definitely low as we all were aware L'Ance was still 35 miles away and that was our planned long break with ride support for food and water. To misquote Doug, "The awesomeness of this ride has long past."

Shortly after getting out of that sand next to Lake Superior, we hit pavement and it stayed pavement all the way to L'Ance. This section of the ride was a game changer. We didn't hammer this, we just paced it. Let the legs turn over, let the muscles relax a bit and just pedaled. We took a short break at a road side carry out for about 15 minutes, but our group got to L'Ance at 9:40pm.

At L'Ance, our wives were waiting with lunch and fresh water. Here, we took a break. We ate lunch, changed socks, dried our shoes, and cleaned up a bit. During our stop, Lois rolled through about 9:50pm. Her mother stopped by and asked if we'd ride with her through the night. I had doubted we'd catch up, she looked pretty strong when she went by. We headed out from here at 10:15pm ready to take on the night: 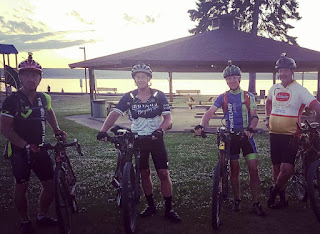 There must have been a lot of mercy given in the course design for getting to the McCormick Outhouse. There was a lot of climbing from L'Ance to the outhouse, but the gravel roads were actually gravel. To my surprise, we caught Lois within an hour. OBV, she soft pedaled this until we caught up. During this section, I was trying to push, push, push, but Doug insisted on getting a moon shot. I have to admit, the cell phone pic captured the moon way better than I expected: 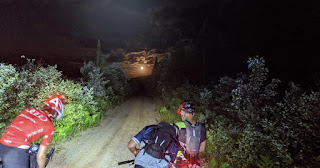 Finding the McCormick outhouse at night consisted of 5 riders, with helmet lights, soft pedaling for two plus miles trying not to miss it. At mile 171, behold it's glory underneath and behind that sign: 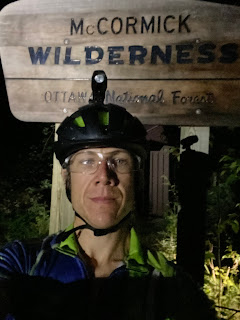 Getting to the Yellowdog crossing went great. We plucked away the miles between the gravel and pavement. The two miles of sand getting to the crossing even rolled smoothly. Slow, but not bike pushing. We had a stop at the crossing for water top off and reapplying the mosquito spray, for those who had it. 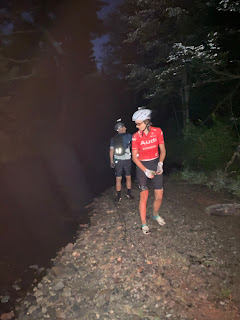 At 5:15am, we pedaled out of the creek crossing and headed to the mosquito gulch. In comparison, mosquito gulch is worse this year. Last year, I rode most of this section. I pushed the uphill sand sections, but I was able to ride the rocks even though I was un-clipping frequently. This year, instead of sand filling in the cracks between all the rock chucks, it was mud. Every bit of dirt in the entire gulch was mud. For the first two miles of the three miles of mosquito gulch, I pushed my bike. I couldn't even stay with the group, I had to push as fast as I could as the mosquitoes were relentless. For the last mile, Rod and I soft pedaled to go slightly faster than the mosquitoes. At mile 207, we regrouped. We pedaled out of here at 6:15am, with daylight to ride in. At this point, Lois stayed back and let our group head out.

The Crusher advertised that chunky summit was back by unpopular demand. Mike Peiffer, a HAMR finisher, said chunky summit would be very memorable. Let me be clear, riding chunky summit is friggen awesome. It's the most five miles of fun I had the entire ride. Hills, rocks, dirt, descents, basically, it's 5 miles of an 8 foot wide MTB trail and we hammered it out. At this checkpoint, we met Chad Mills and he got a group pic. If you look close, you can see the checkpoint sign over top of Chris's left shoulder: 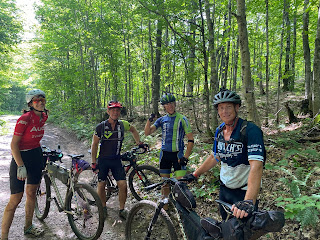 After riding through a few more mile of sand and winding paths, the glorious pole barn of the Forestville trailhead appeared. We finished. 245 miles (on GPS only) and 29 hours 20 minutes total time. That was a long day. Strava: 2020 CrusherEX 225. 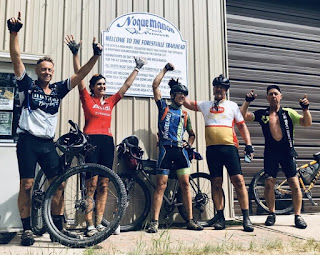 Turns out Todd Poquette was at the finish line. We said hi: 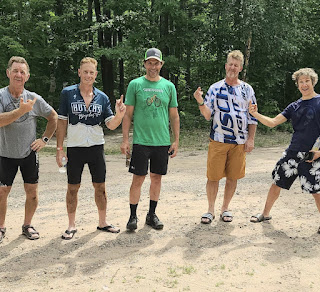 IDK what happened crossing the creek at mile four. The water was clear, about 8 inches deep, and the rock base was clearly visible. Riding across, I'm not even certain what happened. The wheels were sliding out left and I was crashing right. Sploosh! Four friggen miles, soaked head to toe 😡. This blog is chapter one, as I'll be seeing that creek crossing again 7/24.
Posted by Christopher Holmes at 6:04 PM